It’s nuts that it took me this long to find the time to sit down and start putting this together. I told my sibling that I was going to post pictures and the like for their friends in Berkeley, who were interested to know what the hell we were doing putting up a yurt in the middle of the city of Roseville, California. I was amused to hear that friends of friends knew us as “that couple who lives in a yurt.” Also, the information out there on the internet about yurts is still spread pretty thin. So this is a long time coming. 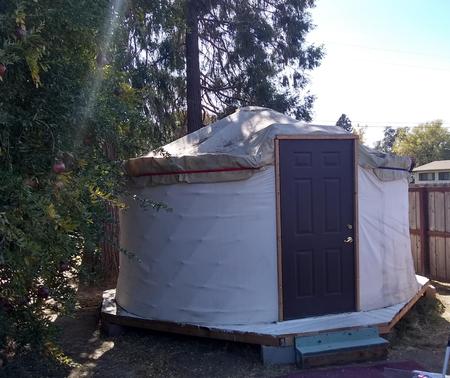 A yurt is a round Mongolian tent, evolved to cater to the nomadic life. My grandpa saw our yurt and called it “tipi living”. I’ve also seen them in movies as small circus tents. The wall is made of a series of tall, thin bamboo rods or wooden sticks tied together in a lattice which is flexible enough to be bent into a circle. Rafters are also arranged circularly, the ends resting on the top of the lattice wall and on the smaller circular crown at the apex of the roof. Traditionally the wooden skeleton is tightly wrapped in furry leathers to make it weather-proof, but canvas is the modern norm.

Lath = Strips of wood that tie together to form the khana

Crown = The round component at the tippy top on which the rafters rest.

And those are pretty much all the terms I’ll be using. There’s more, but you and I shall remain ignorant and just stick to these three.

Why did we build a yurt?

A. We wanted one.

B. So that we could free up square footage at my mom and pop’s place during our stay in between full time jobs.

We started building it in spring, and took it down in the fall. We had to abandon it in our move to Northern Idaho, almost a thousand miles away. Now it looks like this:

Let me know if you want to buy it.

How We Made It

I made good use of several resources. One was René K. Müller’s yurt pages and yurt calculator. They are a fantastic resource and the yurt calculator even has dynamically generated illustrations. In using the yurt calculator, I found myself wishing I could use the lath length as an input rather than an output. After all I wanted to use the full 8 feet of my 2”x4”s! So I examined the calculator and made my own set of calculations in a python script with the inputs and outputs arranged as I liked. That script is now here on my Gitlab.

The other resource was The Complete Yurt Handbook, which was interesting and came recommended, but didn’t turn out to be super helpful given the lumber dimensions we were working with. It recommended using a hanging rod-weighted canvas as a door, which might work for a Burning Man festival, but we needed something a little more people-resistant.

This was the first thing to get done. We laid out a few cinder blocks, framed out a hexagon in 2”x4”s, and then covered the top with 2”x6”s (we used more cinder blocks than pictured). 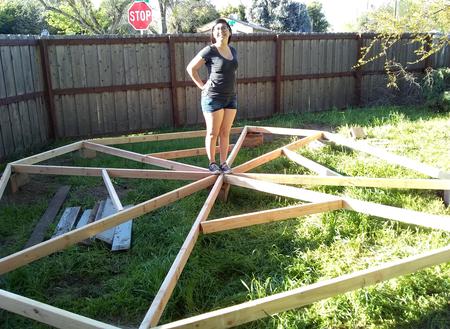 We built it out from the center, keeping the boards tight against each other for insulative and bug-free purposes. 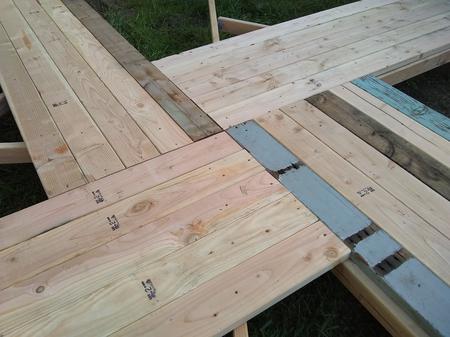 We caulked and painted it, made a single step to get to the entryway, and called it good.

The completed deck. So pretty!

Laths for the Lattice

I bought a lot of 8’x2”x4”s for this. We ripped seven 1/2” thick laths from each one using a table saw that I made out of a circular saw bolted to the underside of my desk from college. RIP that desk.

The growing stack of lumber cuts: 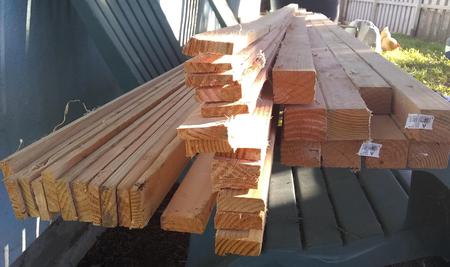 Leather strips to tie the lattice together

I had plenty of leather bits left over from all the bags I’d been making, so I went for the traditional leather to bind the latticework together. 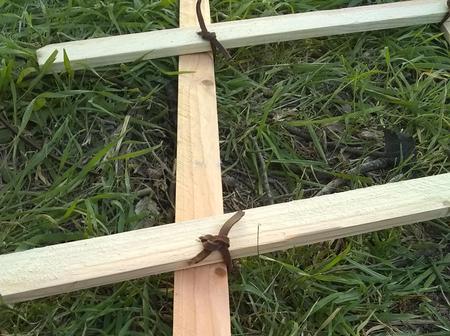 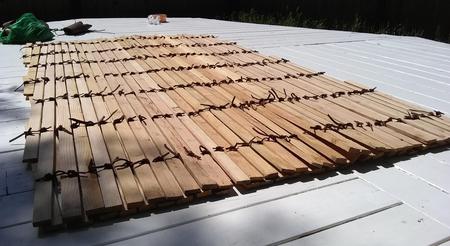 This is probably the least traditional and unique part of the yurt. Usually one would have a wooden crown with holes cut or framed around the perimeter, such that the rafters’ pegged ends fit snugly. Lacking the tools necessary for the versions I saw on the internet, I instead went to the plumbing section of the hardware store and picked up some PVC, connectors, and hose clamps. 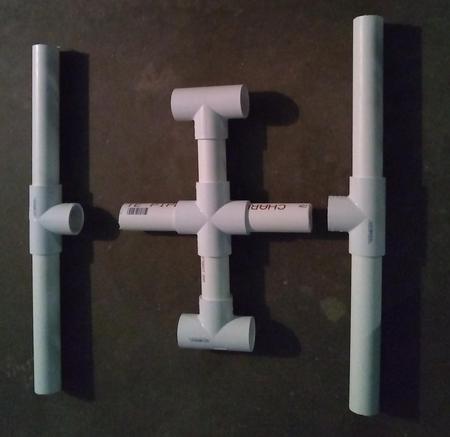 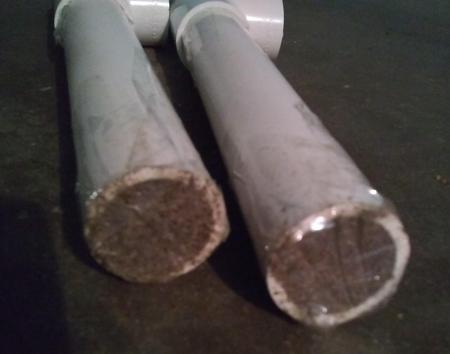 The PVC got cut, packed with sand and sealed at the ends, and gently heated in the oven before being bent into shape. It was definitely a pain in the butt, and would have been way easier if I had gone for a bit bigger crown. I got this idea from what I did years ago to make my gym rings by bending them around a paint can. No glue on the PVC was necessary as the force of the rafters push the crown tightly together.

For some time, we had no hole cut into the rooftop. Then when I installed the swamp cooler on the outside, I also put a small fan just under the crown to blow out the hot air that would gather by the rafters. So I had to cut out a hole the size of the crown in the roof canvas. Then, we had a marvelously heavy rainstorm that lasted a few days. I just slipped a piece of canvas under the hole, and surprisingly, the weight of the canvas roof on the scrap prevented any water from entering.

That said, I wanted a better solution for whomever ends up owning this yurt next. So mid-October I fashioned a hat for the crown. The wooden rod under the hat has several holes drilled in it with two bolts, one on the bottom to prevent the hat from flying off in the wind, the other intended to adjust up and down to hold the hat high if air flow out is required. 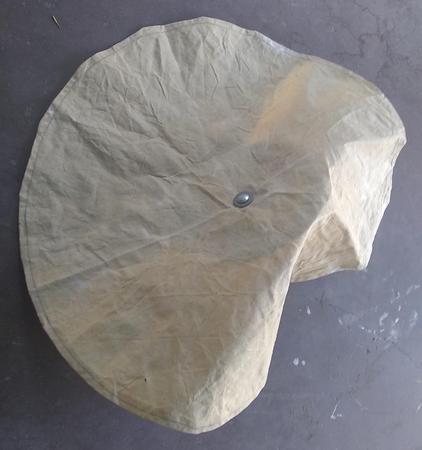 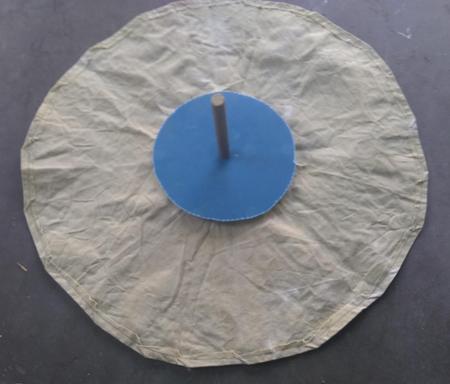 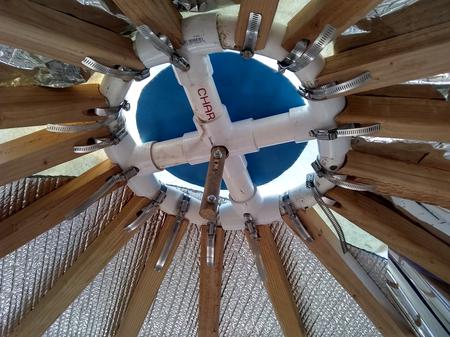 One end cut in a rounded fashion to fit onto the crown, with a hole for the hose clamp. The other end cut with a horizontal slit to fit over the rope holding the lattice in place, with a hole drilled for a leather strip to prevent the rafter from slipping off the rope and whacking anyone on the head (it happened to both me and my wife while putting it up).

One rafter was cut short to sit directly over the door frame. 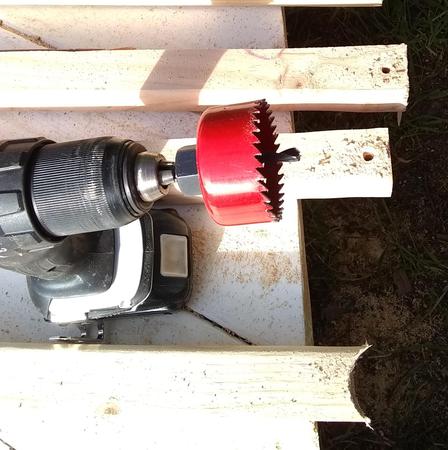 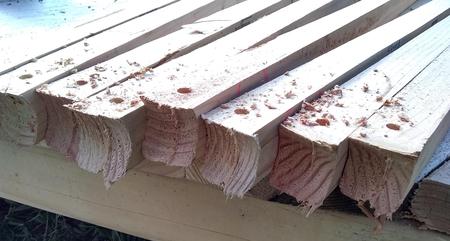 The frame was made out of 2”x4”s, and the door, handle, and hinges were from Habitat for Humanity. We got a deadbolt new.

We did nothing special to the walls, but the roof was treated with beeswax for rainproofing. We had a half paraffin, half beeswax mix, but I would go for just beeswax if I were to do it over again.

The method that worked best for applying the wax was with a good old iron (yes, the iron survived. The key is making sure to use it on some rags before going straight to your Sunday best). Heat pot of wax on stovetop, paint with brush onto canvas, press with iron. Repeat. 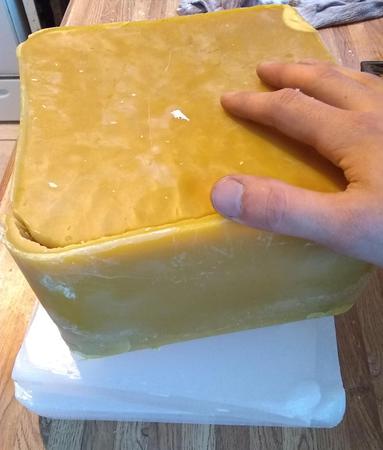 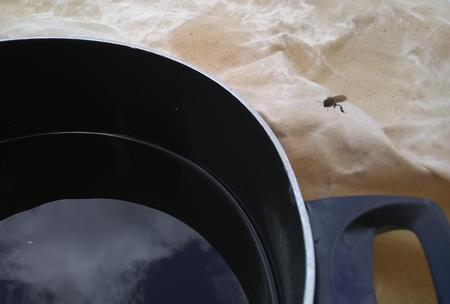 When we took down the yurt at the end of fall, I found that the wax was far thinner at the top of the roof than at the edges. Because we applied the wax liberally, on the hottest days there was an accumulation of wax dripping off the roof – clear wax, meaning that the yellow beeswax had no trouble sticking.

The Devil is in the details

The first half of the summer was spent figuring out all this little stuff.

“How are they getting in??” we kept asking. After installing a strip of canvas sewed (with my Speedy Stitcher) all the way around the bottom and secured to the deck with leftover slat bits and screws, most of the bugs stopped showing up. 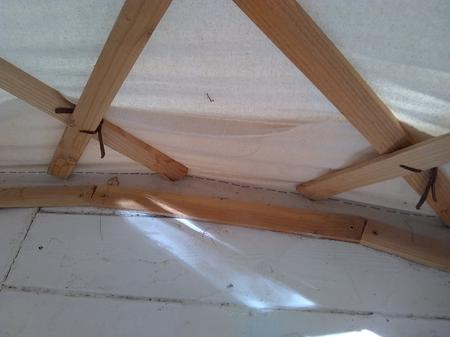 The spiders would get in through the hole we cut in the roof, and putting up a bit of bugscreen fixed that.

I spent way too much time trying to figure out something that would actually reliably keep the yurt cool in 95 degree weather. There was just one hole cut in the side of the canvas wall, and that was for the swamp cooler. The main thing, though, was reflective protection. When we were finished putting up mylar, we found ourselves living in a spaceship.

The other thing was stuffing strips of bedsheet behind the latticework, held up by the rope wrapped around the outside, pinning the roof to the khana. This eliminated the cold airflow in during nighttime.

Securing the edges of the canvas

We could have planned out the angle of the roof and sewed the roof perfectly to fit, but we just sewed three strips together and folded the overlap. I eyeballed the rafter length and it happened to work out OK.

The biggest challenge was figuring out how to seal where the khana and door met the roof prettily and air-tightly.

To secure the roof to the door frame, I folded the edge of the canvas in flush with the frame, then put a short leftover lath piece directly on top, and screwed it in place. 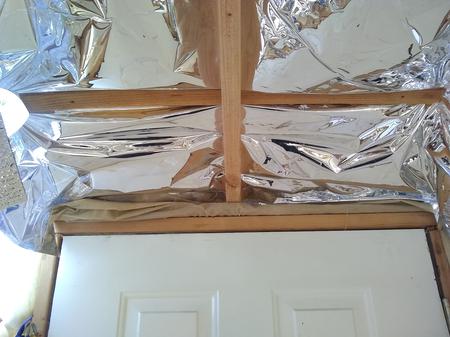 Another two lath pieces lay on the left and right of the door frame on the inside, held in place by small C clamps and a couple screws. Grooves for the C clamps had to be cut from the door frame. This allowed the entire canvas to effectively act as a tension cable, preventing the lattice from inching out over time. That said, we also had a thick poly cable acting as a tension cable running around the top of the lattice, on which the rafters sat. 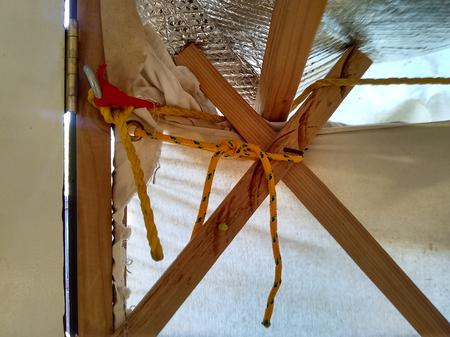 Getting the door to open and close every time

We didn’t have any problems with the door after figuring out that whether the door opened and shut cleanly was a function of whether the top of the frame was being twisted out of parallel with the bottom. This was adjusted firstly by fiddling with the tension of the tension cable tied to the sides of the door frame. Secondly by ensuring that the rafters on either side were pushing an equal share (grabbing the crown and tilting it this way or that).

Breaking down the cost

I finally added up all the receipts and invoices. Here’s how it stacked up:

An equivalent size yurt from, say, Pacific Yurts, Inc would come out to $6,565. Of course, theirs are much nicer.

And some more pictures

If you liked this post and have any questions or thoughts, discuss it on Reddit or email me! One of these days I’ll put in a place for comments.